skip to main | skip to sidebar

Othello: Seven Signs That You Aren’t in a Healthy Relationship

Shakespeare had beaten our contemporary self-help magazine articles to the punch with The Tragedy of Othello, The Moor of Venice. The play deals less with race than it does with relationships, and there a lot of cautions here that modern would-be lovebirds would do well to watch out for. So, if you find yourself wondering if there are any romantic red flags in your current interpersonal entanglement, Shakespeare is here to help. Here are seven key relationship problems from Othello that, if you are experiencing currently, should be causing you substantial alarm:

[I here make the conscious choice to address the ladies, as I am unconvinced that most dudes are willing to be self-reflective about their dating lives. A blogger needs to make these tough choices about how to help the most readers he can.]

1. Your Family Doesn’t Approve
While your freedom to choose your love interest is certainly your own, and inevitably opinionated family members will test and complicate your relationship, remember that these are the people who have proven over time to love, or at least to tolerate, you. They are the people most likely to act in your best interest. If there is something about your significant other that concerns them, it’s probably at least worth your consideration.

Of even more concern, as is the case with Desdemona and Othello, is your unwillingness to let your family weigh in on the issue. Here in Othello, Desdemona marries Othello in secret, sans consultation with Dad, who then has to find out from some shady heckler in the street (more on Iago later). Does this build trust? Does it earn your new husband any points with the family? Certainly not. Furthermore, it shows a decided lack of confidence in your guy’s credentials, whether such little confidence is warranted or not.

2. You Need to Travel Just to Get Time with Him
Does your man’s command of a military action in Cyprus mean that you need to sail out from your Venice hometown to even try for some quality time? Didn’t you guys just get married in secret? Geez. In this sense, Desdemona makes the classic “being too available” mistake – why does she need to follow him around? Okay, Desdemona, so you’re going to go ahead and give all the power in the relationship to him, and let him know that he’s way more important than you. This girl is so 0 for 2.

3. His Problems at Work Are Interrupting Alone Time
Have you made it to Cyprus, met up with your new husband, and finally found a moment to consummate your secretive, unapproved union only to have him get called away from the marriage bed to sort out some dumb problem at work? Was there really no one else to discipline the participants in a drunken brawl? Exactly how small is our army anyway? In any case, Othello’s priorities are clearly not on his newfound marriage, and anytime you’re getting that “he doesn’t really make me feel like I’m important” vibe, whether you’ve misguidedly fed into it or not, it’s a bad sign.

4. You Don’t Trust His Friends
Feel free to rephrase this one to read “You Shouldn’t Trust His Friends,” because your lack of awareness doesn’t make it any better. Whether one of his friends from work is hatching a maniacal plot for revenge, perhaps because some goofball teased him that your man got physical with his wife and your man overlooked him for recent promotion because he’s poor (as is the case with Othello’s unsuspected nemesis Iago), or one of his friends is just always talking trash - to your Dad, to your handmaiden, to some random dude who is into, and kind of stalking, you – the situation (as is also the case with Othello’s unsuspected nemesis Iago) is, or at least ought to be, super-concerning.

5. He Blows Things Way Out of Proportion
If you find your man flipping out over some dumb stuff on a regular basis, it’s definitely worth asking yourself “Why is my man flipping out over this dumb stuff on a regular basis?” We talked about trust, and this particular issue is a sign that for some reason your guy doesn’t enough trust in you or respect for you to try to keep his stuff together. In Iago’s case, the aforementioned goofball teases Iago that Othello had an affair with Iago’s wife Emelia. What proof does he offer Iago? None to speak of. That didn’t stop Iago from flipping out, and a similar lack of proof doesn’t stop Othello from officially going off the deep end. Therein lies the problem at the heart of the doomed relationships that Shakespeare presents in Othello: when a man is sufficiently insecure, the smallest unsubstantiated insinuation is sufficient to ignite the well-fueled fire of jealousy that his own self-doubt always keeps burning. Iago, having fallen victim to this ill-informed jealousy, uses the same destructive tool against Othello when Iago insinuates that Desdemona is having an affair with Cassio, Othello’s much younger lieutenant. Here we do see and effect of the ever-unhelpful racism, because Othello is black, and a lifetime of discrimination has fed the insecurity in him that, in his mind, Desdemona could be interested in an affair with a white guy. What proof does Iago offer Othello? A stolen handkerchief. Nice. So, your wife loses a handkerchief and all of a sudden you’re 100% convinced that she’s sleeping around. Way to launch an exhaustive investigation before you completely turn against your wife, Othello.

6. He Abuses You in Public 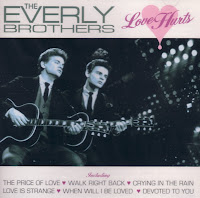 Here I confidently take issue with The Everly Brothers 1960 claim that love hurts.
If your man is hurting you, that is very much the result of a lack, absence, or deficiency of love. It doesn’t matter if he’s crazy, jealous, or if he is covered in a coat of sharp quills like a porcupine; if he loves you, he will do everything in his power to not hurt you. If he chastises you in public, like Iago chastises Emelia, calls you a whore, as Othello calls Desdemona, or if he has the audacity to strike you in public, as Othello strikes Desdemona, that IS NOT love. That’s a dealbreaker, ladies. Shut it down.


7. He Is Currently Attempting, or Has Recently Attempted, to Murder You
If problems one through six failed to sufficiently illustrate that some guys are just completely bad news, problem number seven is sure to establish the point beyond a doubt. Othello sees two horrible husbands murder their wives, and this gruesome and terrible climax definitively illustrates that the play itself is not about love, or perhaps even about any interpersonal relationships at all. Iago had been the trusted confidant of nearly every major character in the play to this point, and Iago stabs his wife Emelia as she exposes him for what he is. Othello cannot make himself a younger, more physically capable man, nor can change the fact that his ethnicity makes him the target of discrimination. Othello smothers Desdemona in a vengeful rage fed less by Iago’s manipulation than his own self-hatred. These men didn’t kill the people they loved; they made a futile attempt to destroy their own failures by lashing out at their living representations.

The point is, ladies, that if some dude makes it a point to blame you for his own shortcomings and inadequacies, it’s important to remember that if a man can’t love himself, then he can’t love anyone else either. That’s just not how self-hatred works. You can’t save him, but you can save yourself. Keep Shakespeare’s signs in mind, and you’ll know how to spot a red flag when you see one.

Read it for yourself: Othello

Quote me on it:

I am on a mission to read everything that William Shakespeare ever wrote.

It started simply enough: I graduated college in 2006 with a Bachelor’s in English and my teaching certification, but what I didn’t have was the feeling that I was terribly well-read.


I feel very strongly that every book or play that I read helps make me a better English teacher, and – in the well-rounded, man of the world sense – a better person.


I appreciate your interest, and I would love to receive your comments, questions, reactions, personal experiences and reviews, or anything else you can think of.

Thank you for reading!